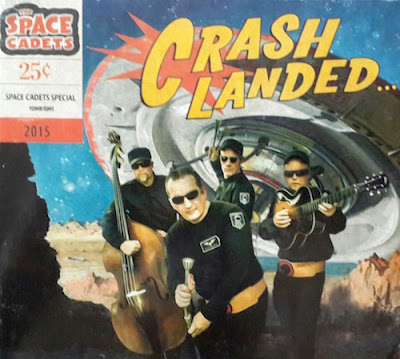 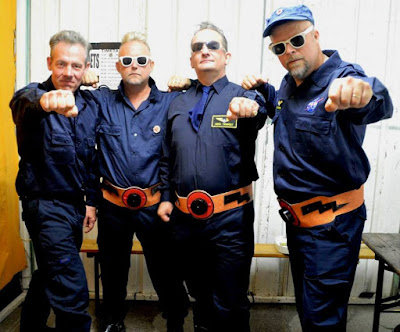 The Space Cadets are back on earth and these kats are looking to cook up some serious fun.This legendary outfit went into orbit back in 1995, put out an ep and 2 killer albums,the last one in 2000.The band disappeared  in 2012  and a "best of"  album was released in 2014.To many they are one of the best rockabilly bands to come out of England.Hell what makes then even more impressive is that this is really an all star side project  that actually is good.  Now the kings of Astrobilly are back  and reloaded  with a new line up and the result is the  pretty damn kool "Crash Landed". This puppy lands hard with 14 original  fun and vibrant tracks that will have you up and at it.We get a whack of sci-fi ,50's and atomic age inspired  rockabilly/ rock n roll .Also there is a splash of country and a little blues added into the mix.Highlights include: "Space Cadet Psychos" , " Be Boppin' Baby " , "In Space" and "Gonna Ball Ball Rock Tonight".
No matter how you slice it "Crash Landed"  is a killer album that has a ton of  appeal and not just for the rockabilly crowd.Kid you not ,these kats  sound  just as good today as they did 15 years ago.Don't believe me then check it out! Highly Recommended!!  http://mousezinn.wix.com/the-space-cadets    https://www.facebook.com/pages/The-Space-Cadets/195163787178040  https://www.facebook.com/groups/THESPACECADETS/
Posted by Slams Reviews 2 at 13:55