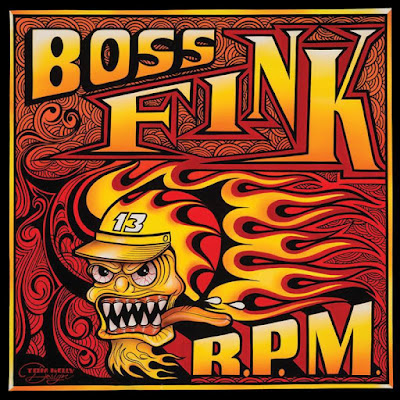 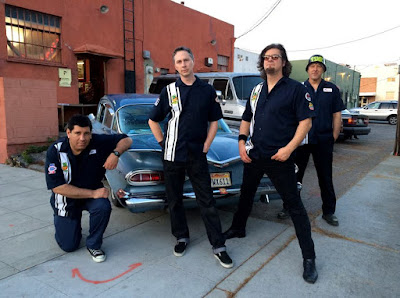 On the strength of one ep,"Finksville" and a whack of pedigree many fans of surf music are expecting big things from  Boss Fink.Since lighting up the So-Cal  scene a couple years ago these kats have earned a solid rep and have become kinda a buzz band .Their brand of hotrod ,drag and rat fink inspired surf is just flat out kool.The band's debut album has been highly anticipated  and comes with  some high expectations.That said, the debut is now here and  "R.P.M" definitely delivers in spades.This beast  smashes ashore with 15 killer tracks(13 new) of first wave  inspired surf that more than holds it's own.When you hear about hot rod, rat fink inspired surf  this is what there talking about.  From start to finish this is one powerful and kinetic ride.No dogs here ,it's all more than good.Standout tracks include: " Pontiac Chief", "Motorvixen" , " Boss Fink Twist" and "5th Horseman" which first appeared in 2013.
Simply put "R.P.M." is one really killer album that should be in everyone's collection.Hell it's one of the better albums to come down the pike in a while. Definitely  one of the best releases so far this year  by anyone in any genre.Highly recommended!!!  https://www.facebook.com/BossFink/timeline
Posted by Slams Reviews 2 at 14:18