The Hillmans - Kings Of The Weald Frontier 2015 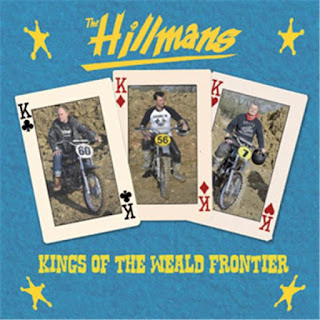 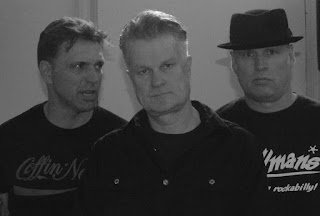 Alot of people know of The Hillmans but most probably haven't  heard them and that's a shame.Since thier start in  2010 these kats have released 3 killer eps yet remain a bit of a mystery too many out there(especially in North America). Their brand of "ragged  rockabilly",psychobilly and  Cramp's fueled garage  is nothing short of a delicious brew that's hard to resist.So it was only a matter of time before someone came along and signed them.Well no  real surprise here; Western Star stepped up  and now the long awaited debut album is now out . The result is "Kings Of The Weald Frontier" and this puppy is a tour de force that barks as hard as it bites.We get 14 tracks of which half  are new and the other half have appeared  on their previous eps.The mix of old and new is a great move here  and highlights just how consistent The Hillmans are.The mix of old school psychobilly,rockabilly,garagepunk and hillbilly comes off vital,fresh and has a sense of urgency about it .Highlights include: " Backwoods Boy", " Baby Loves To Fight" , " Whoa Blue Baby" and " Dog Man"
The Hillmans have always been a  very strong band and that continues on "Kings Of The Weald Frontier". Do yourself a favor and pick  it up, it's pretty impressive and  as they say  it cuts the mustard . Highy recommended!!   http://www.thehillmans.net/  https://www.facebook.com/TheHillmans/timeline
Posted by Slams Reviews 2 at 12:43