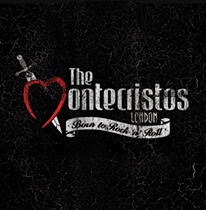 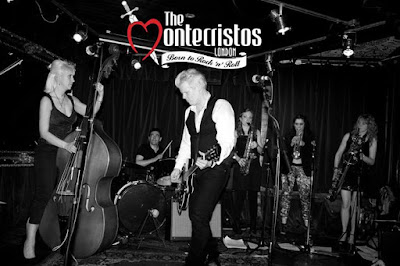 Over the years guitar slinger Neal X  has done some pretty impressive work with a wide range of artist  but  he's mainly remember for his band Sigue Sigue Sputnik.You could say that was a band you either really liked or had no use for, either way  Neal X's newest project is  The Montecristos  and they will diffidently  be a pleasant surprise for most.Since late 2012 the outfit has managed to not only creating  a buzz but also a rep as a damn good band.Hell the  bass slapper is  Emma Goss(The Daytonas,Something Shocking, The Griswald and more) so you just know this is a stout outfit.The band's debut album, "Born To Rock N Roll"  is one album  you should check out.Clocking in with 14 tracks of real rock n roll that's fun, sexy and infectious.This is 50's inspired rock n roll  that's driven by a horn section with rockabilly, glam and surf all thrown into the mix.We get a kool mix of covers and originals as well as 3 Sigue Sigue Sputnik songs that   totally come off as vital and fresh.Highlights include: " Badfinger Twang", "Dirty Little Lowlife", " Born To Rock N Roll" and " Love Missile F1-11"
The Montecristos are a band that has benefited greatly from word of mouth and rightfully so."Born To Rock 'n' Roll" is a direct result of a hugely successful Kick starter campaign .This is a  strong  and surprisingly very good album by a band that's looking to kick some rock 'n' roll butt. Recommended !!!
https://www.facebook.com/TheMontecristos?fref=ts   http://themontecristos.com/
Posted by Slams Reviews 2 at 07:08