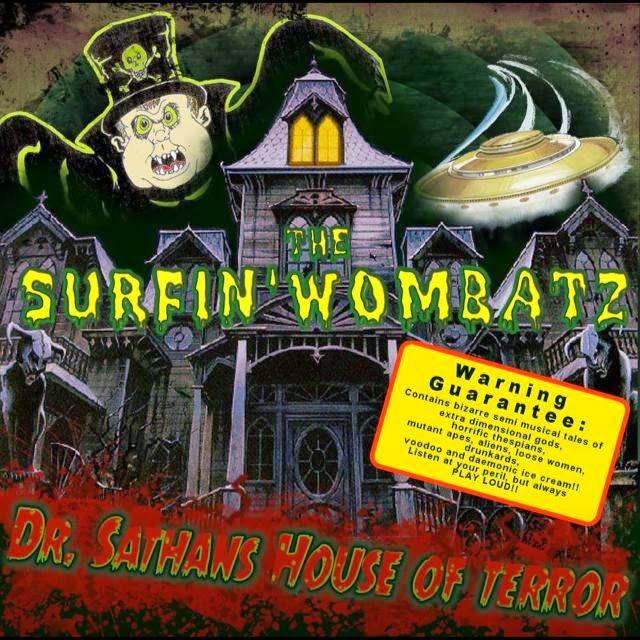 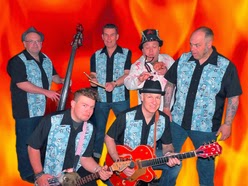 The Surfin' Wombatz  have been kicking around off and on since 1987 with a brand of fun, horror based old school psychobilly .For some" back in the day" the Wombatz were just a fun band that wasn't serious and known more as "a  bunch of lager-swilling psychobillies". In 1989 they managed to release the album "Lager Loutz" a decent effort than had a few kool moments.However in 1990 the band released the real kool single "Peter Cushing"(a 3 song single)  that was  from   "the forthcoming LP : Dr. Sathans House of Terror". Apparently this has become kind of a running joke to more than a few people, including the band .
In 2013 the band released  a 4 song ep called "Peter Cushing Ep". Well now in 2014 the band has  finally delivered  "Dr. Sathans House of Terror" and to tell you the truth this is a surprisingly damn good album.Coming in with 13 tracks of sci-fi , horror and at times funny old school psychobilly  that's all good. Hell we get all 4 songs from the  "Peter Cushing" ep and a whack of kool and nifty tracks that really deliver .Highlights include: the kool "Peter Cushing", " Alien Abductors", "The Curse of the Pharaoh’s Chamber Pot" and the killer "Planet of the Psychobilly Apes".
The strength of   "Dr. Sathans House of Terror" is that it doesn't take itself so serious.This is a fun album  that's full of strong and very likeable songs that you won't forget ,hell even your kids will think your kool if they hear you playing this! Recommended  https://www.facebook.com/surfin.wombatz?fref=ts   http://www.reverbnation.com/surfinwombatz