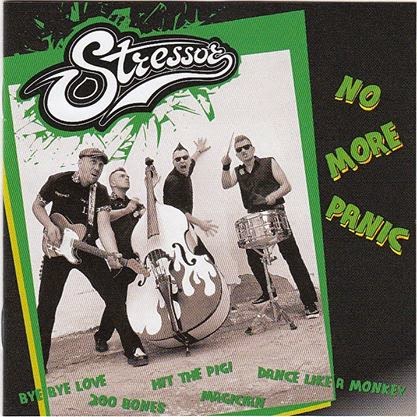 One can't help but be a fan of Stressor.Over the years this Russian band has been written off by more that a few people and each time they seem to come back harder and better.Want proof  in  late 2010 they lose a key member only to bounce back with not only their best album but a truly killer one at that,  "Trip To Mad City" in 2012.Now in 2014 Stressor are back with an album that simply ups the ante. "No More Panic" the band's 5th album is nothing short of a knock out punch, this puppy really rocks and is easily their best yet.Hell my better half has been playin' the crap out of it. Coming in with 13 tracks of kool old school psychobilly  that are horror/sci-fi  free (just what you expect from these guys) makes this a very fresh sounding and exciting album.Highlights include " Earthquake Coming", "200 Bones","Hit The Pig" and a kool cover of "Bye Bye Love"
Stressor seems to be hitting full stride on "No More Panic" and old school psychobilly doesn't get much better than this and that sayin' something.This puppy is a must. Highly Recommended!   https://www.facebook.com/stressorofficial   http://www.stressor.ru/