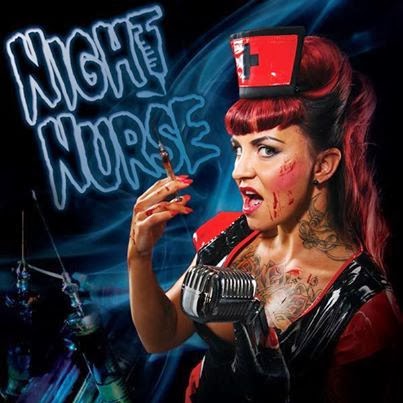 When the Finnish psychobilly outfit,Night Nurse formed in early 2012 they quickly became a band to watch.Basically this is Jim Dandy's Revenge with a female singer.When Wolverine Records released the band's track "Where Shadows Go" on the  compilation "Roots! Riot! Rumble! people really took notice and the song started to get airplay on some psychobilly shows.Hell there is even interest in these kats in my neck of the woods(Canada). With the release of their self-titled debut, Night Nurse have thrown down their hand and it's an impressive one. With 12 servings of psychobilly that aren't all cut from the same cloth makes this a pretty damn good album.Sure at times this sounds familiar but still manages to sound fresh and invigorating. Highlights include:" Teenage Kaliman","Mean Old Low Down Dirty Bastard","Obsession" and "Where Shadows Go".


Someone told me  Night Nurse were "modern psychobilly" another dude told me they are horror punk and the band claims to be both. One thing for sure is that  Night Nurse is good  no matter how you slice it and this is one hell of a debut album.Recommended  https://www.facebook.com/nightnursepage     http://www.nightnurse.fi/
Posted by Slams Reviews 2 at 14:47