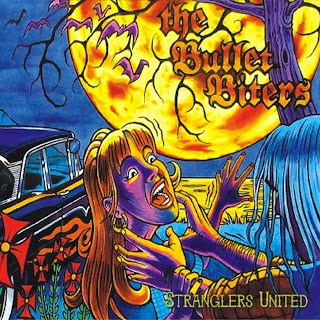 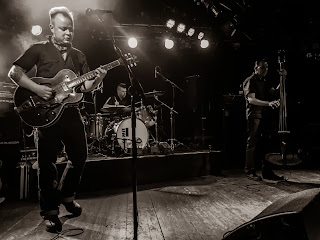 Hailing from the frozen  wastelands of Finland  comes The Bullet Biters one of the best bands you probably never heard of.These psycho kats have been knocking them dead in their homeland since 2004.With 2 successful ep's under their belt the band has quietly gained a rep for been kinda kool.You could say that they are one of Finland's best kept secrets.Well hopefully that's going to change with the release of "Stranglers United" the band's debut album. This puppy crashes the door with 12 original psycho rockers that are just straight up kool.You could say  this modern psychobilly done with an old school take .It has a a familiarity to it but at the same time it's a breath of fresh air. Highlights include: "Strangler Of Deserted Beach', " Delirium Rock", "She´s My Mystery Girl"and  the sure fire butt-kicker "Voodoo Transit".
Stranglers United is one of those albums that will appeal to more than just the psychobilly crowd .From the first track to the last it fires on all cylinders.How good is it ; you have to be a  brain dead kind of a guy not to like it. Recommended  https://www.facebook.com/pages/The-Bullet-Biters/134605343277545    http://www.bulletbiters.com/
Posted by Slams Reviews 2 at 20:00