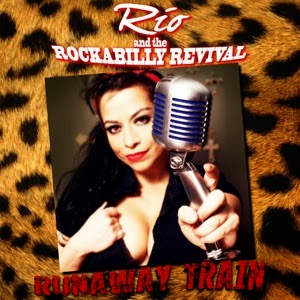 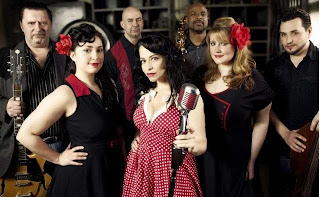 Considered by many to be one of Detroit's finest bands,Rio & the Rockabilly Revival  are also a hard working outfit that has a rep for been a killer live band.Last year(2012) they released the ep "The Midnight Rebel Sessions" a very strong disc that caught a lot of people off guard and also gained  a fair amount of airplay world wide. As a result of this the band managed to create a pretty good buzz  leading up to the release of their debut album. Well " Runaway Train" is now out and this puppy  delivers the goods .Strolling in with 9 fun and diverse tracks for your pleasure.This is a kool mix of rockabilly, blues ,rock n roll ,a little soul and some swing to boot.Highlights include: "Runaway Train","That Man's So", "Good Man" and "Rumble & Roar".


Rio & the Rockabilly Revival are more than  just a rockabilly band  and "Runaway Train" proves that in spades This is a band to watch and one that really has it going on.Recommended   https://www.facebook.com/RioRockabillyRevival    http://www.rioandtherockabillyrevival.com/RRR_Online/Rock_It!.html