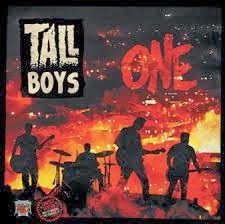 One of the most anticipated albums of this year has to be the Tall Boys "One". This legendary band has never really released an official album until now.From 1983-87 the band put out some singles, an ep and a mini album .In 1998 "Funtime" a complete works was released and in 2011 "Live at the Klub Foot" (recorded in 1985) came out and the band reformed and played  a few gigs .Earlier this year the band generated a fair amount of buzz (on both sides of the Atlantic) when they entered Camden Recording Studios to lay down an album.The resulting disc "One" is vintage Tall Boys  and that's a good thing.This is killer stuff folks and just what you would want and expect.Old school psychobilly meets garage, punk and rock n roll that's still unique and kool .This puppy slides in with some new,some old and a few covers that add up to one hell of an album.Highlights include:"Another Day ","River Of Fire","This Bird Will Fly" and  "The Man Who Walked On the Moon".
The Tall Boys are in fine form here and as a result "One "is diffidently one of the better albums to come down the pike this year.Hell it may even blow your socks off! Recommended.   https://www.facebook.com/TallBoysUKofficial