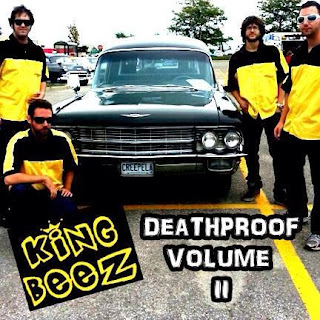 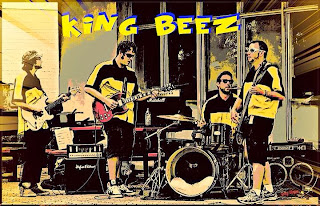 When the King Beez put out an album you can bank on a few things,that it will be loud,in your face and also damn good.After all this is one of the best  smash mouth surf bands out there. If  2012's " DEATHPROOF VOL 1" proved any thing it's that these boys aren't afraid to jump into dangerous waters.The melding of surf and metal is no easy trick to pull off and the King Beez nailed it.Now there back with "  DEATHPROOF VOL 2" and lets just say the band has stepped it up.Punching in with 6 tracks that ooze power, this is surf metal at it's best.Highlights include:"Rise Of The Shadow People", "Chupacabra", "Hellride" and "Dia de Muertos".

DEATHPROOF VOL 2  may not be everybody's cup of tea but make no mistake the King Beez are  one killer surf band that can and will push the boundaries of surf music.This is loud,in your face and also damn good.Just what you would expect. Recommended !  https://www.facebook.com/kingbeezcanada   http://www.mattgroopie.com/
Posted by Slams Reviews 2 at 19:09