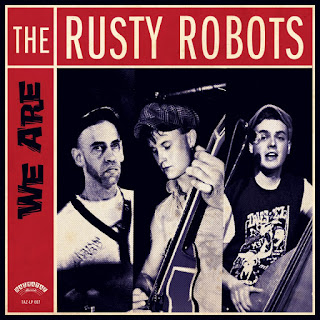 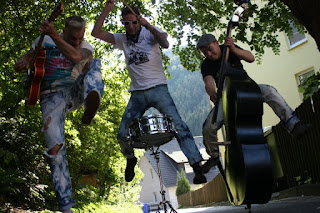 I first heard about The Rusty Robots  in the summer of 2012  and what I heard was that this was a young upcoming  band to watch out for. Turns out  these German psycho’s are pretty good .Despite been  only been around for less than 2 years ,they have managed to make some big waves. So now we have the bands debut album “We Are” and it kicks in with 15 tracks of old school psychobilly  that’s done well. With most of the songs landing in at the 2 minute mark or less this puppy moves along at a good pace  and it’s not dragged down by the  horror angle .These guys are more into love, life and assorted animals and that’s kinda different in a good way. Highlights include : “Hidden In The Fog”, ”Psycho Love Cat “, “Apache Man” and “We Are Robots”. Overall this is a pretty decent debut album  from a band that isn’t heavy handed or that takes itself  too seriously  and that’s refreshing .Check it out. http://www.facebook.com/pages/The-Rusty-Robots/177499245633408?ref=ts&fref=ts

Email ThisBlogThis!Share to TwitterShare to FacebookShare to Pinterest
Labels: The Rusty Robots - We Are 2012 Germany psychobilly old school psychobilly