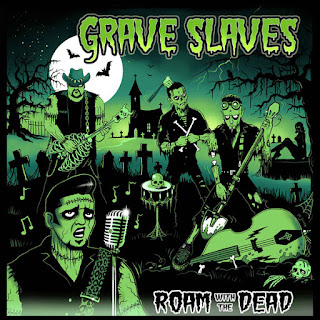 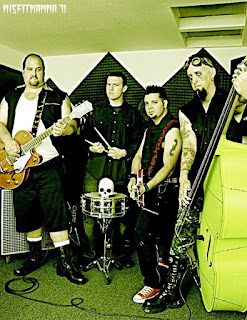 The Grave Slaves are the  latest  buzz band  out California .For some of us that’s enough not to  pay them any attention (As a friend of mine says :just because they’re from California  doesn’t make them good ).  Saying that  Grave Slaves  do live up to the buzz .This is a band that  can  go from psychobilly  to   horror punk  and not miss a beat . “Roam With The Dead “ is the bands debut and  it’s a  interesting one to boot .Clocking in with  14 tracks that  have enough bone shakin to please  both psychos and punkers .Highlights include :  “Outlaw”, “Blood Red “ ,“Maybe Some Day” and “Devil In Disguise” which has a  kool harp  brake. This is a solid album by a band you may want to  keep an eye on. www.reverbnation.com/graveslaves        http://www.facebook.com/GraveSlaves
Posted by Slams Reviews 2 at 09:38