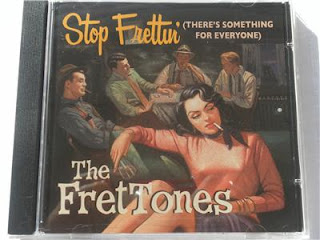 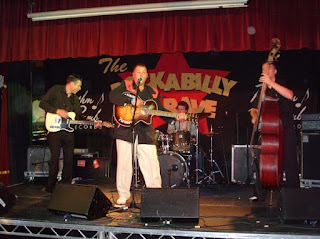 Hailing from Scotland The Fret-Tones  have been making waves with their “fabulous rockabilly” since 2007 .Many people consider them the finest Scottish band out there  and who am I to  argue. Their debut album “Down On My Luck” was pretty good and generated some buzz .Now the band has dropped their  2nd album  “Stop Frettin”  and this puppy is straight up damn good. Clocking in with 14 originals and 2 covers that for the most part stroll  between rockabilly ,rock n roll  and some tinges of country. Highlights  include: “Cup Cake Girl”, “Hotrod Draggin’ “, “Hipshake Milkshake” and the kool rocker  “Burlesque”. Stop Frettin’ is one of  those releases that make you  take notice of a band  .It’s well done ,sounds great  and without a doubt isone of the best rockabilly albums to come out this year . Recommended   http://www.facebook.com/TheFretTones?ref=ts&fref=ts
Posted by Slams Reviews 2 at 10:16