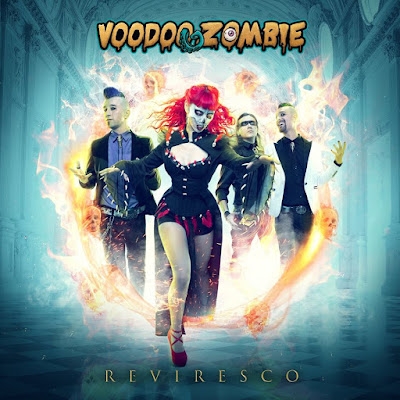 It's been almost 6 years now since Voodoo Zombie's last release,the single "Zombiewalk"(2012).While they are back and in a big way with their third album, "Reviresco". This time out they are on the new upstart label Batcave Records.Whats not new is that they worked again with Rene De La Muerte (The Brains). So you just know that  "Reviresco" is one damn rockin' affair .Pulling no punches we get an intro,a radio spot and 10 original tracks of stout and catchy psychobilly.Two of the tracks have previously been released , "Armor Psycho" and "Zombiewalk" are reworked here .This is psychobilly that at times has a hard rock edge but the band mixes it up.From an acoustic driven number to all out psycho rockers.Highlights include: "La Llamada De Cthulu", "Un Mejor Cadillac", "Amarte Es Peligroso" and "El Mesias"
Voodoo Zombie have scored a winner with "Reviresco" It's well produced  and has a great vibe.It's easily their best effort yet and shows that they have a lot more to offer up. It's a powerful and fun ride that you want to get in on. Highly recommended!!
https://www.facebook.com/voodoozombieoficial/
Posted by Slams Reviews 2 at 21:27