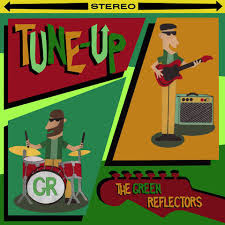 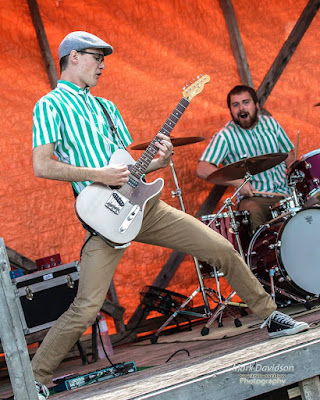 There are a couple things you should know about the surf / rock instrumental duo,The Green Reflectors .One they don't dick around.I'm talking these cats throw down frantic and fast songs that for the most part are under 3 minutes.Secondly their damn good and aren't afraid to blow the roof  off  the joint. Hell they also have a  rep as a must see band. With an already impressive rap sheet they have just added "Tune-Up",their latest and best release so far. This puppy smacks down with 14 original killer tracks that will light a fire under your ass. We get a blast of  instrumental rock  that mangles up with surf and surfpunk .It's a hard hitting ,fast paced thrill ride that pays off big.This time out they stretch their legs and  go over the 3 minute mark 4 times. Proving they can push it and succeed.High lights include: :Rip Rap", "Coke Can Crab", "Run Away", The Western Song" and Surf Sea D.C.".


Once again  The Green Reflectors deliver a big bang for your buck. They also up the ante here and as a result this will color you impressed.But then again if your familiar with them you probably already are.Highly recommended!!!
https://www.facebook.com/thegreenreflectors/     https://thegreenreflectors.bandcamp.com/album/tune-up
Posted by Slams Reviews 2 at 22:17