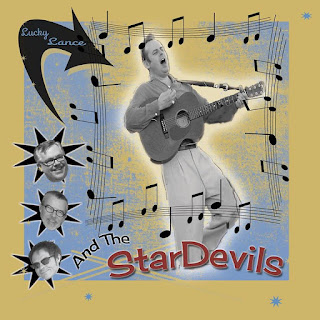 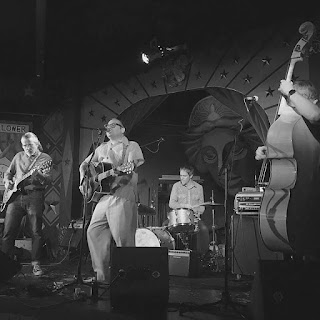 Right from their start back in 2000 The Star Devils have been a top shelf rockabilly outfit.Despite only 3 albums (One as The Star Devils Trio) and their last release ,the single "You Little Witch" ,these cats have earned one damn serious rep and rightfully so. This is pretty kool rockabilly that takes a backseat to no one.Saying that ,the band has now dropped their the long awaited  4th album " Lucky Lance & the Star Devils" and this puppy doesn't disappoint  .We get 12 originals that range from all out rockers to hillbilly boppers and even a slow burner. It's  stout rockabilly that mixes in a dose of hillbilly and a touch  western swing.The result is a well balanced and consistent album that will color you impressed.Highlights include: " "Masticatin' ","Super Time Mama "," I Wanna Jump" and "Some Kind Of Cool ".
Lucky Lance & the Star Devils have another winner on their hands with  this self titled effort.It's a pretty sweet ride that shows these cats are in top form and still have a lot of gas in the tank.Highly recommended !
https://www.facebook.com/StarDevils/   http://www.stardevils.com/
Posted by Slams Reviews 2 at 20:02