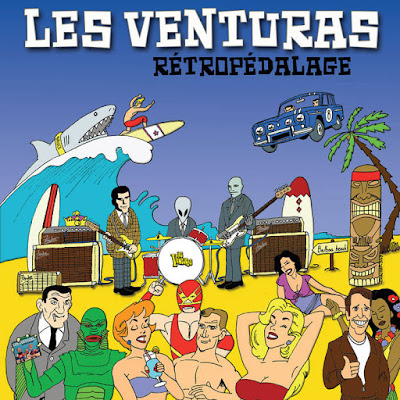 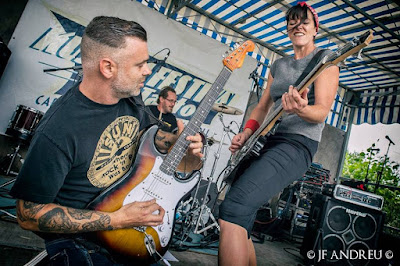 Over the years France has produce more than a few damn fine and interesting surf bands .One of latest bands to emerge  is Les Venturas. Starting out in 2014 as a Ventures tribute act they managed to make more than a few waves  in Europe.In July of 2015 they released the sweet  " Tribute To The Ventures, 17 Surf Rock Classic Hits".Since then this surf trio has continued to gain a rep as a stout band that executes, top shelf  "old school" inspired  surf.In 2017 the band was picked up by Productions Impossible Records and now the results are in.The band's sophomore album "Retropedalage"hits the shore with 14 original tracks of kool traditional inspired surf .This time out they ratchet up the speed and aggression a notch.You could say they let loose a little  here and raise the tension,all while still keeping it still planted in traditional surf.Highlights include: "Escalator", "Vodka & Paella", "Retropedalage" and "Seraphino"

Overall " Retropedalage" is a pretty strong and refreshing surf album and one you should pick up.If  Les Venturas aren't on your radar ,they should be.Highly recommended!
https://www.facebook.com/lesventuras/   http://lesventuras.blogspot.ca/