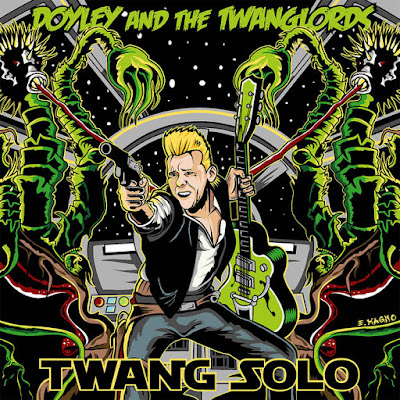 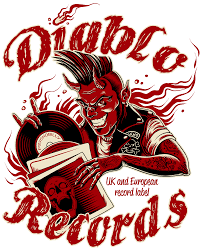 The ever busy and prolific Philip Doyle (aka Doyley) is at it again.Now he's flexing his musical muscles  with  Doyley & The Twanglords and the stellar album "Twang Solo". This puppy crashes ashore with 20 kool instrumental tracks that range from traditional surf to surfpunk  to psycho surf .If that wasn't enough throw in some sci- fi, spy, b movie madness and shades of spaghetti.It all makes for a  rich and diverse mix  that will have you coming back for more.Also some of the tracks originally date back to Doyley's Klingonz days as well as tracks from The Zorchmen and The Guitar Slingers.Highlights include: "Twangzilla" , "D-Twang", "One Of Our Spies Is Missing", "Graviton" and the remix of "ZorchX14"
Diablo Records have another winner with " Twang Solo",hell even the album art work by Eugenio Magno is sweet. It's a top shelf surf album that gives you a big bang for your buck and hopefully Doyley & The Twanglords isn't a one off project . This is one you diffidently want to get your hands on. Highly Recommended!!  https://diablorecordsuk.bandcamp.com/album/doyley-the-twanglords-twang-solo
https://www.facebook.com/groups/253948874790519/
https://diablorecordsuk.com/
Posted by Slams Reviews 2 at 08:52