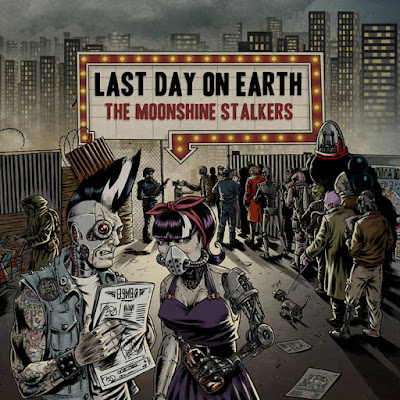 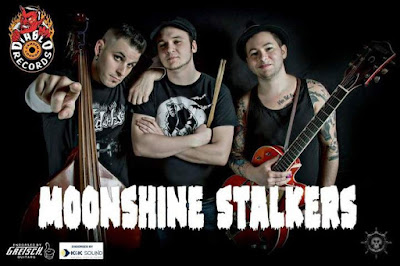 For some The Moonshine Stalkers  are still young upstarts but these cats have now been around 5 years.With an ep and their debut album "Spatter House (both killer) they have firmly established themselves as one of the koolest and better psychobilly bands out there. So now in 2016 The Moonshine Stalkers are back with the sophomore effort  "Last Day on Earth" and again they deliver the goods .This time out we get 10 killer and fun tracks that beat the sophomore jinx with ease .We get a modern take on old school psychobilly but they shift the gears a little bit here.Not only is this modern psychobilly but at  times this comes off as rock n roll.  The band sounds more crisp,kinetic and more confidence than ever. Highlights include: "S.T,D.", "Speed Street", " Last Day On Earth" and  "Miss Murder".
Without a doubt "Last Day on Earth" is a flat out winner The Moonshine Stalkers don't go for that single knock out punch here instead they hit you with a whack of well placed hits that win you over.This puppy is well written,executed and produced(Doyle of Diablo Records). One has to be impressed.Highly recommended!!  https://www.facebook.com/themoonshinestalkers/?fref=ts    https://diablorecordsuk.bandcamp.com/album/moonshine-stalkers-last-day-on-earth
Posted by Slams Reviews 2 at 13:09