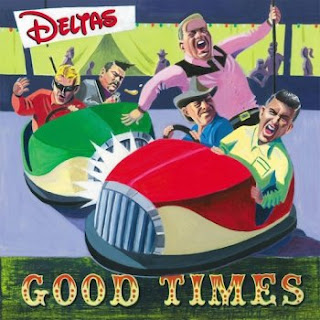 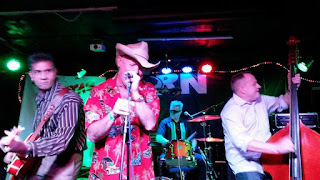 The Deltas have always been a kool band .Right from their start back in 1980 the band quickly earned a rep as been one of the wildest live acts around .Hell their brand of  revved up, blues fueled rockabilly helped push the first wave of psychobilly into the public eye.To this day they still  remain not only  influential but also essential listening.From 1981's "Boogie Disease" to 1996's "From Feetville To Vegas" these kats have laid down some serious frantic rock n roll.All that said it's been 20 years since their last album and now they are back and just as hungry as ever. Not messing around these kats headed over to Diablo Records for their latest effort and the result is the killer album "Good Time Guide". This puppy comes in with 11 tracks that don't disappoint.Ranging from  rockabilly to all out rockers to the blues and even country. The band doesn't miss a step here and at times this is refreshingly vigorous.Highlights include "Wreck Your Country", " Milk And Honey", " Alligator Wine " and "80 Minute Drive".
It may have been 20 years since their last outing but The Deltas are in fine form on  "Good Time Guide". This is a standout album by a band that still has a fire in their belly Highly recommended!  https://www.facebook.com/The-deltas-250517841792977/?fref=ts
Posted by Slams Reviews 2 at 12:47