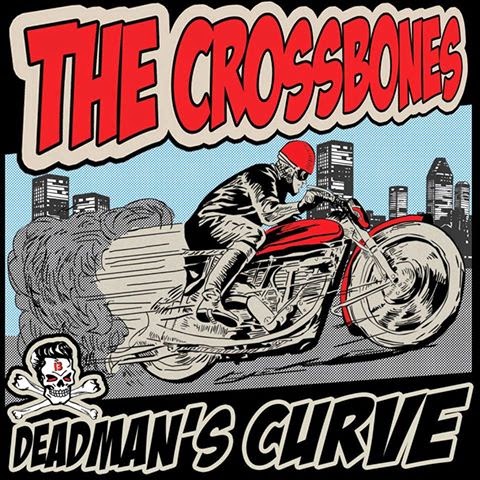 From down under comes The Crossbones and this is one kool rockabilly trio that isn't afraid too mix it up.Since forming in 2013 these kats have made a name for themselves in Australia with their full throttle brand of billy music.They also have a rep for being a pretty fine live band that doesn't take itself too seriously.All that said the band's debut "Deadman's Curve " is an an album you should check out.Clocking in with 8 original kool and diverse tracks that deliver the goods.This is  modern rockabilly with splashes of country, spaghetti and  blues all thrown into the mix.Highlights include: " Big Mumma Bop" ," Splinters and Teeth", " Deadman's Curve" and the catchy " Your Car Ain't Cool".
A big  plus for the album is that the songs pretty well all sound different and they manage to flow together giving it a good vibe. Even thou "Deadman's Curve" plays out in under 24 minutes it manages to punch hard ,sounds fresh,has a sense of humor  and is damn good . The Crossbones are definitely a band to keep an eye on.Recommended!   https://www.facebook.com/thecrossbones      http://www.reverbnation.com/thecrossbones4
http://www.thecrossbones.com.au/
Posted by Slams Reviews 2 at 14:59