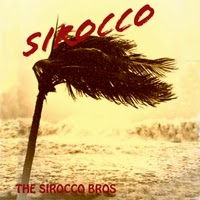 Mysterious and dark The Sirroco Bros. are also a band that are considered to be a top flight  rockabilly band.Despite having a really solid  reputation over in Europe,  they are virtually unknown here in North America. Hell my first exposure to them was totally by accident.Since 2011  they have released a string of killer singles that will impress any die hard rockabilly fan.If you happen to miss all those singles don't fret The Sirroco Bros. have released all of them plus a couple of new tracks on one their debut album " Sirroco ". You could say it's a greatest hits or the complete works or better yet their "Singles Going Steady" but  one thing for sure is that it  is confirmation  of just how good these kats really are. We get 11 original  tracks here of primitive, dark and kool  rockabilly  that are impossible to resist. A lot of billy bands try but never manage to grab that 50's billy feel and sound but  The Sirroco Bros nail it. Highlights include : " Move Out" ," Devil Bones", " Cat", and "  I Put a Hex On You".
The Sirroco Bros. may be the koolest  band you haven't heard and this is a hell of a disc that really is a must Highly Recommended !!  https://www.facebook.com/pages/Sirocco-Bros/538405322895147?sk=timeline
Posted by Slams Reviews 2 at 13:41