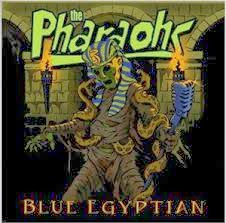 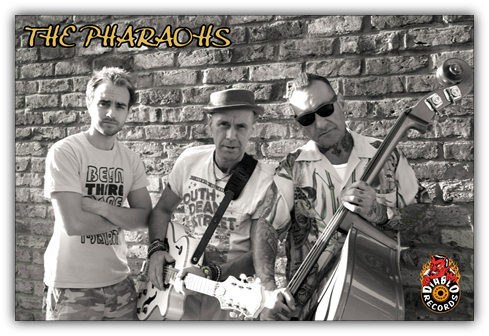 Way back in 1986 The Pharaohs released their debut album "Blue Egypt". That one album would cement them into history  and still today is much sought after.The band's sound was a cross between neo-rockabilly and psychobilly but what separated them from the pack was very strong song writing and that there was a kind of  a quirkiness about them.Over the years the band  has made  a few comebacks  and have released a kool ep(Vigilante) and a couple more albums including the excellent Hammer & Sickle Blues.The  band's last album came out in 2000.
In 2013 the band was decided it was time to lay down some tracks  and they went into Camden Recording Studios.The result is the impressive "Blue Egyptian". This puppy bounces in with 13 tracks that's a mix of old and new originals plus one cover. We get a redo of 5 songs off  "Blue Egypt" and a redo of "Vigilante". Surprisingly the older tracks sound just as fresh and strong  as the new ones ,a testament to the strength of the song writing and their production.


Highlights include: "Tomb of the Dead","Gambling Man", " Rehab"and "Blue Egypt". The decision to re-record the older tracks diffidently was  a daring and  smart choice.This is one great sounding ,strong ,well balanced and totally fresh album. Oh and they  kick it old school and still have a little quirkiness about them.Highly recommended!!  https://www.facebook.com/diablorecords   http://diablorecordsuk.co.uk/
Posted by Slams Reviews 2 at 13:33