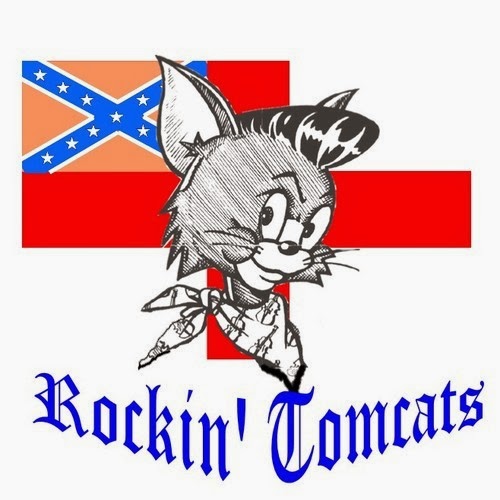 Earlier this year we(Shakin Katz Radio) received a package in the mail from Eastern Canada  that contained a burnt cd and a message that we should check out this new kool old school psychobilly band the Rockin' Tomcats.What I heard  impressed me I and wanted to know more about these guys but when I started to do some research, you could say I was totally impressed .This wasn't a new group,turns out  it is a sessions band lead by Chuck De Deville that's been around for some time. 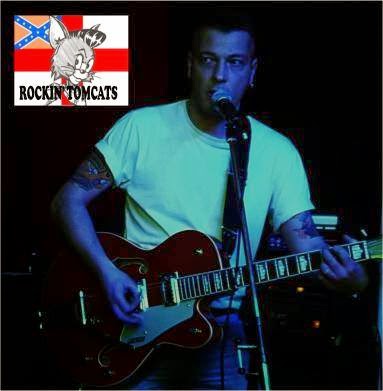 Formed  in Hamburg, Germany sometime during 1990 and by 93 the band had laid down a few tracks and started playing gigs.Over the years and despite life getting in the way Chuck De Deville has kept  the band's name out their, at times he has wrote and recorded songs by himself or with a line up that has changed many times.  In the last couple of years things have picked up  for the Rockin' Tomcats ,there has been interest in the band by a pretty big name label and the line up has become a stable 3 piece.There was also a name change to Dead Chux for about a year  before settling back to the Rockin' Tomcats. Chuck  has also worked with Jon Peet(Frantic Flintstones), Wyane VanSnick, Dale Williams(The Radiacs) and just  recently with Paul Oxley(The Radiacs, Kreman,and EpilepticHillbillys) .
As of this writing the band hasn't released an album  but there is probably around 40 tracks out there as well as more new tracks coming out  for your listening pleasure on You Tube,Facebook  and Sound Cloud  .  Most of the tracks that have been laid down are old school psychobilly (done very well) , some surf/ instrumentals,rockabilly, a few acoustic numbers  and some covers.

For a  body of work that stretches over 20 years this consistently well written, sounds great and is surprisingly fresh, it's damn impressive.You could easily get 3 killer albums from the tracks that have been put out. There are numerous stand out tracks such as "Handle With Care", "Dead Bones","Murder Death Kill","Breakout ", "Board Ride" and the just released "Psycho Rider"(with Paul Oxley).
The Rockin' Tomcats  are definitely a band to check out.There are plans afoot for the band to  possibly tour later this year with The Radiacs and also to hit the studio in the summer.This is a band that really has flown under the radar for far to long  and deserves to be heard With out question this is top notch stuff!!
Links : https://www.facebook.com/DeadChux?filter=3
https://soundcloud.com/rockin-tomcats
http://www.reverbnation.com/rockintomcats
http://www.reverbnation.com/chuckdeville
Posted by Slams Reviews 2 at 12:38