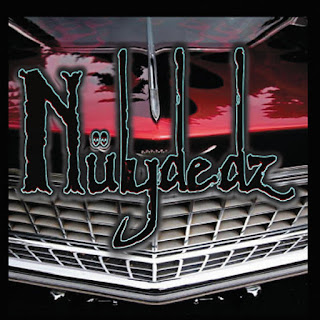 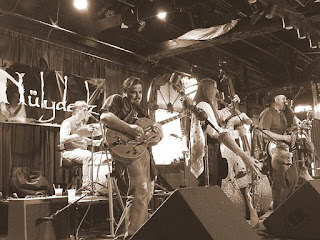 Have to admit when I first saw the name Nülydedz my mind was leaning towards this been some kind of psycho/metal viking band .Boy was I wrong on that.The Nülydedz hail from Louisville, Kentucky and are a "Zombie Rockabilly band" that play something called "PsychoZombilly". Their debut is called "Voracious Nülydedz" and guess what it's all about zombies,brains and more zombies.If your like me you may not be a big fan of the so-called horrorbilly but I gotta say this is kinda kool.Clocking in with 10 original tracks of zombie inspired  tunes that sit at the corner of rockabilly and rock n roll.There also is a bit of country flavor as well as a dash of cowpunk to boot.  Highlights include: "Big Brains", " Demolition Derby Time" ,"Team Zombie"and  "Zombie Revival".
This is not only fun stuff  it also is a pretty kool album that will deliver more than you expect.You may want to check this puppy out.!https://www.facebook.com/pages/N%C3%BClydedz/238726802821080?fref=ts      http://www.reverbnation.com/nulydedz
Posted by Slams Reviews 2 at 17:57