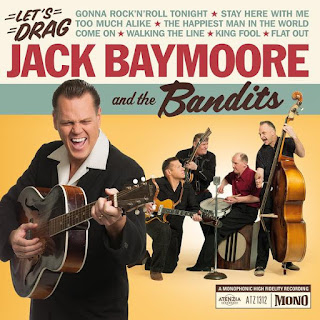 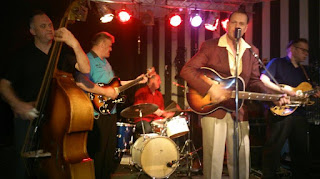 Since 1996 Sweden's  Jack Baymoore & The Bandits have strived to be one of the best rockabilly bands out there.These kats have not only built up a strong following  but have also sold a surprisingly amount of records/cds in the process.In Sweden they have charted very well in the past .The last album the band put out, "Diggin' Out" was released  in 2003.So now in 2013( ten years later)  the band has dropped their 5th album and no surprise here it's good.  Let's Drag comes in with 13 tracks that is just what you would expect from this outfit : real solid 50's rock /rockabilly with tinges of country and hillbilly.We get a mix bag of new songs, some covers and some remakes of older songs all which add up to a pretty satisfying disc.Highlights include: "Come On", "Flat Out", "Move On" and "Fireball Roberts".
It is good to see that a top shelf band like Jack Baymoore & The Bandits still got it and can rock out .This probably isn't the band's best effort  but that doesn't mean it's not damn good .If you haven't heard of these guys this is a really good starting point and if your already a fan you know you gotta have it.This is some good rockabilly.Recommended   https://www.facebook.com/pages/Jack-Baymoore/502036629837842?fref=ts  http://www.baymoore.com/start.asp