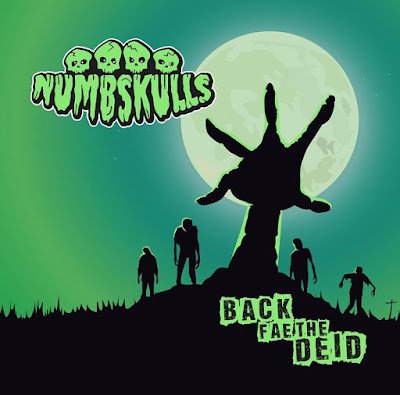 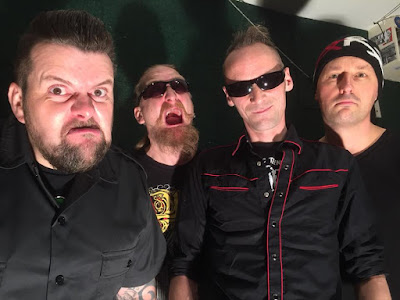 Scottish psychos the Numbskulls have been dead and buried for a hell of a long time .So there arising from the grave last year put more than a few people on notice.Back in 1990 their debut album "Psychophobia" made a splash and their second album "Life In Limbo"was recorded in 93 but wasn't released until 97.For many they are the best psychobilly band to come out of Scotland.That said they are returning in a big way. These lads signed up with Diablo Records,went in to the studio with Doyley and the result is the hard rockin' "Back Fae The Deid ". This puppy comes out of the gate damn strong and brings it on.We get 10 original tracks that mash psychobilly with  rock n roll. It's also laced with  Scottish / Celtic themes that only add to this thrill ride. Every song here rocks and it really is equal parts psychobilly and hard driving rock n roll.Highlights include: "Midgees" ,"Bean Nighe", "Dunnottar Siege" and "Guts'n Glory"
Rumor has it that these cats got back together to have some fun and or for some unfinished business.One thing for sure is "Back Fae The Deid" is a refreshing and killer album.It's also surprisingly one of the years best .It will color you impressed!   Highly recommended!!
https://www.facebook.com/numbskulls.uk/
Posted by Slams Reviews 2 at 07:25