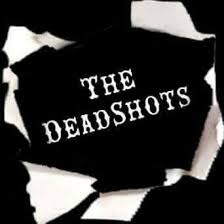 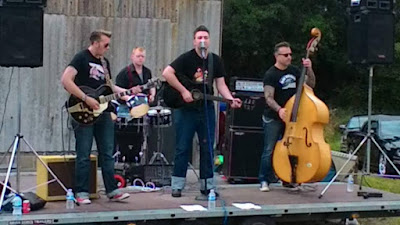 Since blasting out of Redditch, England in the spring of 2015 The Dead Shots have managed to get a rep as an exciting and kool rockabilly/rock n roll outfit.Hell word of mouth on these cats has been all positive.The band's self-titled debut album backs up the buzz about them and more.This puppy blazes in with 7 originals and 3 covers of pretty stout  modern rockabilly/ rock n roll that will have you  up and at it.They also throw shades of the blues into the mix and that gives the ride a little more thrust.Highlights include"Boppin Gal", "Mean Eyed Women", "One Of These Days" and "Lovin' Man"

As far as debut albums go, this is a pretty impressive effort .It delivers the goods and leaves you wanting more.One also gets the feeling that these cats have a lot more in their back pocket and that should tell you something. Highly Recommend !!
https://www.facebook.com/TheDeadShotsRockabilly/     http://www.thedeadshots.co.uk/
Posted by Slams Reviews 2 at 21:01