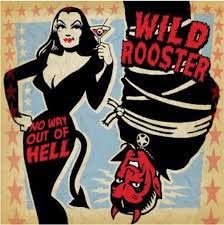 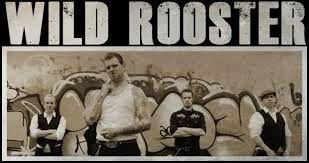 Over the years Sweden's Wild Rooster have been one band that definitely has not only matured but also has gotten better.These Teddyboy rockers have been described as "kick ass bad boy rock’n’roll"  but ask around and you will find that to some people they are "hard driving rockabilly ", a straight up Teddyboy band and to others a "revival  band".No matter what one's take is ,most agree they are a killer band .That said  "No Way Out Of Hell "is the bands 5th album and you could say it's pretty darn good .Clocking in with 12 tracks(9 originals) that combine elements of teddyboy,rockabilly and just plain rock n roll into a neat and solid package.You could say that this is just what you would expect and that's a good thing.Highlights include: " King Of Dreams","Rockin' Little Jill ","My Inner Beast" and the title track "No Way Out Of Hell ".


Wild Rooster has delivered a great sounding effort here.This is their most well balanced and strongest album yet and that's saying something. Recommended. https://www.facebook.com/pages/Wild-Rooster/278099192225635  http://www.wildroosterrock.com/
Posted by Slams Reviews 2 at 06:49