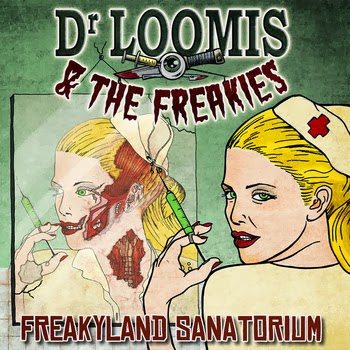 Dr Loomis and The Freakies may have formed in 2008 but it wasn't until 2011 that they really became a band.Since then these French psychos have been hard at work.Their demo in 2011 received a lot of attention and I'm betting more than they know.They started playing more gigs and got busy writing all while creating some buzz outside of France.Word came in early 2013  that the band was going to release an album and that perked more interest in them .Well now "Freakyland Sanatorium" (their debut album) is here and this puppy delivers the goods.Clocking in with 12( the demo tracks are included here also) psycho rockers that hit the ground running and don't stop.This is a psychobilly carnival ride that's all fun. There is also enough change ups to keep you interested  and that helps the album flow pretty good.Highlights include:" Run Baby" ,"Ghost Bastard","Second Coming" and "Home".
Freakyland Sanatorium at times comes off like old school  but it's more a mix of both old and modern psychobilly . Definitely a band to keep an eye on and an album that you should throw a few bucks down on! Recommended  https://www.facebook.com/drloomisandthefreakies  https://www.facebook.com/groups/462897260404798/  http://www.reverbnation.com/drloomisandthefreakies
Posted by Slams Reviews 2 at 15:09