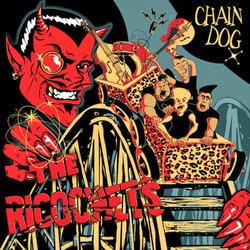 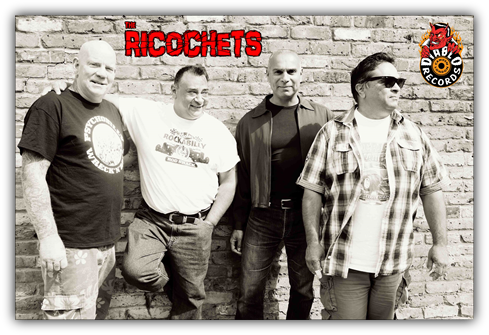 The Ricochets are one of the first and arguably one of the most important psychobilly bands there has been.Yet they remain one of the least talked about or known bands of the genre.In 1982 they release the landmark and hugely influential album "Made In The Shade ". When the band called it quits a couple of the members went on to other bands you may know of (The Meteors and Guana Batz) .One has to wonder how history would have unfolded if the band had stuck around. They came back in 1992 with the release of another killer album" On Target" and again packed it in. In 2004 the band started playing again and have done  some big shows, so in 2013 the band entered Camden Recording Studios to lay down their third album.
The result is "Chain Dog" and this is one fine album that only adds to the bands legacy.Clocking in with  a collection of 12 killer old school psychobilly tracks that a times come off like ground pounding rockabilly.This is a  likeable swift kick in the pants.Highlights include:" Devil's Highway"," Psycho","She's Gone" and "Like a Tiger".
The Ricochets not only sound in great form here but also fresh and vital .Having Doyle of Diablo Records  producing the album is also a plus.It seems that a lot of older bands have come out of retirement the last couple of years and we all know some should have stayed retired In this case it's great to have The Ricochets back : they are legendary and they sound better than ever.Really how kool is that.
Recommended!     https://www.facebook.com/groups/219610795827/   https://www.facebook.com/diablorecords  http://diablorecordsuk.co.uk/