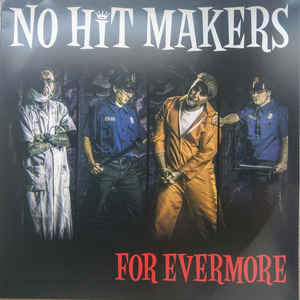 For a bunch of cats that have been around for over 10 years the No Hit Makers  have a pretty limited  but impressive rap sheet. With a self-titled 4 track ep, released in 2010 and 1 track on the  " Rockers Kulture - The French Rockabilly Scene #1, also in 2010.Their  next release was ,1 track off the 2014 "Four On Fur" compilation.They are a band that for many has slipped through the cracks.That's a shame because this is one stout outfit that knows how to dish out some sweet neo rockabilly.With the recent release of their debut album "For Evermore" they have resurfaced in a big way.This rockin' slab of neo rockabilly/ rock n roll aims to please and succeeds.Punching the clock with 10 originals and 1 cover. Two of the tracks(both standouts); "You Can Cry" and "Blind and Deaf "were previously released.Overall this is a brisk and killer ride that will have you up and moving.Hell it's also damn refreshing and will have you hitting the repeat button.Highlights include: "Since My Baby...", "With My Old Black Cadillac", " You Were Too Young To Die" and "Bitter Taste".

The No Hit Makers are a band you should definitely check out.They nail it with "For Evermore".It's one of the years best and easily cuts the mustard.Highly recommended !!!
https://www.facebook.com/nohitmakers/