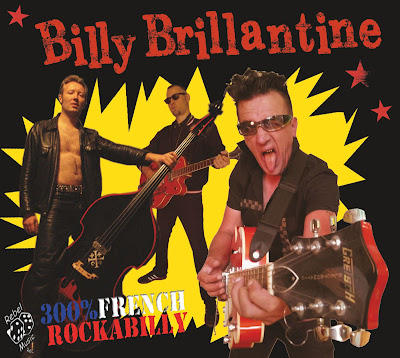 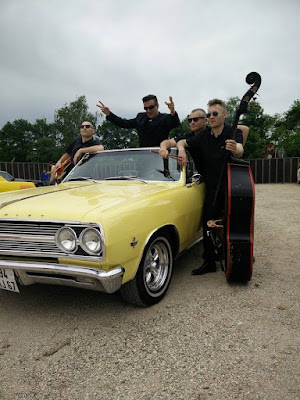 If your looking for some kool rock n roll/rockabilly  that will blow your shirt up then Billy Brillantine & The Bandit Rockers are the band for you.Billy Brillantine has been kicking around Europe since the early 80's.In 87 his band The Dodgers released the kool single "A La Claire Fontaine" / "Qui ça Bop" .Over the years the band has morphed into  Billy Brillantine & The Bandit Rockers .This is one outfit that has earned a rep for been exciting, killer and just a whack of fun.Now they have just dropped their debut album  on Rebel Music Records (a killer label you should check out) "300% French Rockabilly" and this puppy is pretty stout.Clocking in with 17 tracks (12 originals and 5 covers) that nails it.This is  rockabilly mashing with rock n roll  and teddy boy rock,hell what's not to like.We also get some harp action thrown in to boot.As for the 5 covers, the band really rocks them out  and The Dodgers  two songs are also rerecorded  here. Highlights include:  "Rockers-Bikers", "Kurvica sa fejsa"," Les Teddy Boys" and a kool cover of " Teenage boogie".
The album  is divided between  French and English which mixes things up.Also this is surprisingly diverse with none of the tracks sounding the same. Billy Brillantine & The Bandit Rockers  have released a rock solid winner with  "300% French Rockabilly " Highly Recommended!!
https://www.facebook.com/pero.mihajlovic.12?fref=ts   https://www.facebook.com/BILLY-BRILLANTINE-129228377175280/?fref=ts    http://rockabillyrecords.de/
Posted by Slams Reviews 2 at 14:17