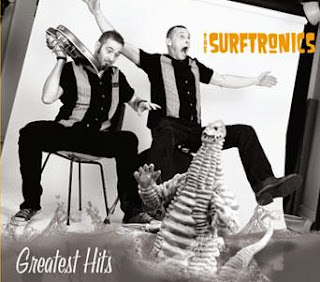 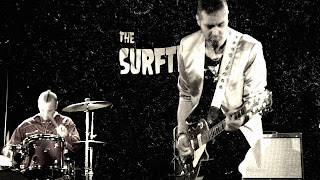 The Surftronics claim they hail from Surf City, Quebec and their debut album is called "Greatest Hits".Right away you gotta like this guys.By the way this two piece is known to dish out some pretty kool surf ."Greatest Hits" rides in with a kool mix of 14 originals and covers that clock in at around 35 minutes, so you know these guys keep it short and brisk.The band covers a lot  of the surf gambit here; from traditional to spaghetti  and spy .There is also a healthy dose of some "chessy "organ  throwin' the mix too boot.Highlights include: "Drive-O-Gringo","Submarine","Cactus Revolution" and " Frankie Goes to Shish Kebab".There is also a surprisingly  kool cover of  "Heartbreaker-Loving Maid".
You just know The Surftronics don't take themselves too seriously and that they have a sense of  humor. This is a really strong debut album that is very likeable ,fun and damn good by a band you should keep an eye on.Recommended  https://www.facebook.com/pages/Les-Surftronics/491234594265994   http://www.thesurftronics.com/