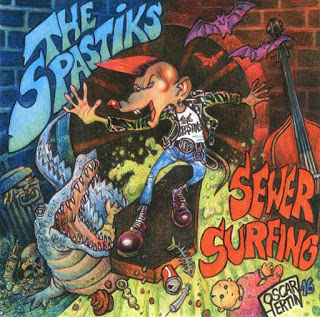 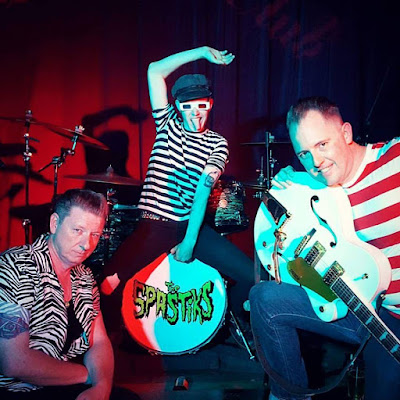 Since emerging from the depths of Brooklyn back in 2013 The Spastiks have been a band that many psychos have keep an eye on.After all here was an actual  old school psychobilly that has flare,is fun and pretty damn good to boot.In 2014 the band released a  4 song demo managed to snag some deserved and solid airplay around the globe.Early this year(2016) they released the killer ep"Cannibal Clan" and it firmly put these cats on the map.Not slowing down they have now released their debut album "Sewer Surfing" and this puppy is a blast of fun.Clocking in at around 25 minutes it hits you with 10 songs that leave you wanting more.We get 7 new tracks here with 1 off the demo and 2 off "Cannibal Clan".  This is old school psychobilly done very well and doesn't take itself overly serious as a result it's a brisk ride.Highlights include: "Radiation Baby", "Dynamite", the country flavored "My Baby Was Abducted by Aliens" and  "Retard"
The Spastiks have delivered a winner with " Sewer Surfing".This is one kool rockin' album that pulls no punches and one you should check out .It's old school psychobilly that's very refreshing and you gotta like that.Recommended!  https://www.facebook.com/TheeSpastiks/
Posted by Slams Reviews 2 at 11:51