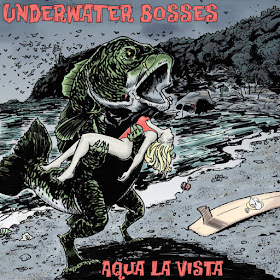 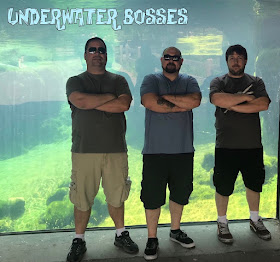 In one form or another The Underwater Bosses have been kickin around upper state New York for a few years.Most notably as The Beard and Surfer R Cool. In late 2018 they became The Underwater Bosses and things started to break.They recorded their debut album earlier this year  and Sharawaji Records quickly signed them up and for good reason. That debut album "Aqua La Vista" is one killer and stout release.This puppy punches the clock in with 12 original tracks of  surf rock/surf punk.Hell they even throw in a couple of tracks with vocals and a little math rock, just to keep you on your toes.This is aggressive surf that doesn't overload  you and comes off as robust and refreshing.Highlights include: Bass Head", Surftacular", "Ride Of The Surfers Ride", "Surfin Hand" and " KGB Tsunami".


Over all this is a one impressive debut album and one that you should snag up.It will have you hitting the repeat button on a regular bases,so what more do you want. Highly recommended!!
https://www.facebook.com/underwaterbosses/
http://underwaterbosses.com/
Slams Reviews 2 at 11:43
Share